Madaba It is best known for its Byzantine and Umayyad mosaics, especially a large Byzantine-era mosaic map of the Holy Land. Madaba is located 30 kilometres (19 miles) south-west of the capital Madaba dates from the Middle Bronze Age.The town of Madaba was once a Moabite border city, mentioned in the Bible in Numbers 21:30 and Joshua 13:9.

During its rule by the Roman and Byzantine empires from the 2nd to the 7th centuries, the city formed part of the Provincia Arabia set up by the Roman Emperor Trajan to replace the Nabataean kingdom of Petra.

The first evidence for a Christian community in the city, with its own bishop, is found in the Acts of the Council of Chalcedon in 451, where Constantine, Metropolitan Archbishop of Bostra (the provincial capital) signed on behalf of Gaiano, “Bishop of the Medabeni.”
The first mosaics were discovered during the building of new houses using bricks from older buildings. The new inhabitants of Madaba, made conscious of the importance of the mosaics by their priests, made sure that they took care of and preserved all the mosaics that came to light.

A 6th-century mosaic map of Jerusalem in the Madaba Map The Map of Madaba mosaic was discovered in 1896 and the findings were published a year later. This discovery drew the attention of scholars worldwide. It also positively influenced the inhabitants, who shared the contagious passion of F. Giuseppe Manfredi, to whom the rediscovery of most of the city’s mosaics are owed. Madaba became known as the “City of Mosaics” in Jordan.

The Madaba Mosaic Map is a map of the region dating from the 6th century and preserved in the floor of the Greek Orthodox Basilica of Saint George, sometimes called the “Church of the Map”. With two million pieces of colored stone, the map depicts hills and valleys, villages and towns in Palestine and the Nile Delta. The mosaic contains the earliest extant representation of Byzantine Jerusalem, labeled the “Holy City.” The map provides important details about its 6th-century landmarks, with the cardo, or central colonnaded street, and the church of the Holy Sepulchre clearly visible. This map is one key in developing scholarly knowledge about the physical layout of Jerusalem after its destruction and rebuilding in 70 AD.

Mount Nebo is one of the most revered holy sites of Jordan, located 10 km (6 miles) west of the Roman Byzantine town of Madaba, for this is where Moses (pbuh) was buried. The site’s association with the last days of Moses is described in moving words in Deuteromony (34:1-7). The episode of Balak and Balam (2:13-26) also took place here.

The site’s other name is Pisgah: “And Moses went up from the plains of Moab to Mount Nebo, to the top of Pisgah which is opposite Jericho”. From the mountaintop, which is the highest point in the Moabite range, rising to about 800 meters at its apex, you can admire the dazzling view across the Jordan Valley and the Dead Sea, to the rooftops of Jerusalem and Bethlehem.

Centuries ago, pilgrims flocked to Mount Nebo on their final destination to visit the sanctuary. These pilgrims left behind vivid accounts of their travels, which helped archaeologists identify this sanctuary. 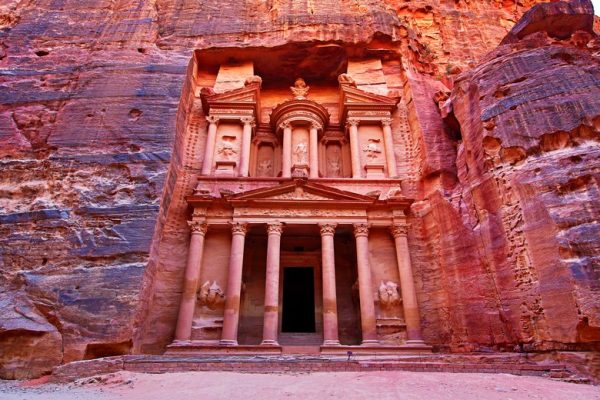